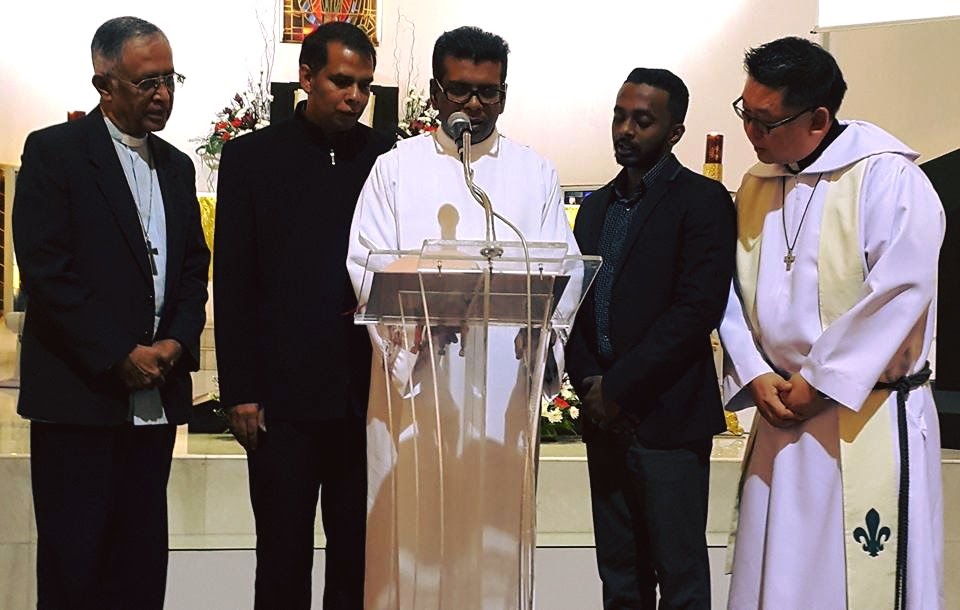 KUALA LUMPUR:- The Church of the Sacred Heart of Jesus (SHC) hosted the ecumenical Week of Prayer For Christian Unity, on Jan 20, 2017 that saw seven pastors from the different denomination Churches present together with SHC parish priest, Fr Edwin Peter and Archbishop Emeritus Murphy Pakiam. The 200 strong congregation who were present for the 7pm Mass includes members of the different Christian denominations, as well as the local Catholics.

Fr Edwin Peter celebrated the Eucharist and welcome all who were present, coming together to pray for Christian unity.

In his homily, Fr Edwin said we come to celebrate Christian Unity, profound to be working for the same Lord. Though we are living around (in the same vicinity), we hardly meet each other.

Then the diocesan priest posed the question “What is a team?”. He said we are Team Jesus- One Lord, one Baptism, one Lord Jesus Christ. Just like a football team, we need each other. We do not aspire to be the best on the team, but rather aspire to be the best for the team. Fr Edwin equipped that being alone we can do so little, but if we (Christians) work together, we can do much more for the Lord, for God’s greater glory and to make Him known.

Going further, Fr Edwin said we Christians should not compete each other, and asked the assembly; is there a Catholic heaven or Methodist or Anglican heaven? But rather has the spirit of unity and reconciliation for Team Jesus.

After the Prayers of the Faithful, the assembly recited the “Christian Unity Prayer”, praying in one accord for visible Christian unity, that all may unity and strive to work and pray together that we may be more fully united in the one Christ.

After Mass, a simple dinner fellowship for all was held in the parish courtyard, where the Christians mingled with each other. All then adjourned back into the Church where Praise & Worship was held. This was followed by a welcoming speech by PMEIA Coordinator, Florence John. She said St Paul compels us to be ministers of reconciliation and we are the ambassadors for Christ. In John 17:21, (that they all be one); we too have to be the bridge builders with other faiths; not just with Christians.

The assembly then listen attentively to the sermon by Pastor John Peter who spoke on BEC or Cell Groups. He said Christ is the head of the Church, we are all His Body, one Church. We go to a cell group or BEC to edify each other, not to bring anyone down and striving for unity. We are all cells of His Body.

This was followed with Pastor Mathew Chay who said this is a first time of him preaching in a Catholic Church and hope for more of such an event to have Christian fellowship. His preaching was on Mark 2:1-12 (Jesus forgives and heal a Paralyzed man). The Anglican pastor emphasized that there must be spirit of unity to bring the person on a stretcher up to the ceiling and down to meet Jesus in the packed house, carried by four persons. Jesus saw their faith.

Next was Pastor Amala Dass who spoke on Christian Unity. He said we come from different Churches, different denominations, yet unity is importance in Christ. We need to keep the spirit of unity. He quoted several versus from the Scripture. We need to emphasize In Christ we are one, despite of our differences. We are all washed cleanse with the same Blood of Christ. We are all here because of Jesus Christ has paid the price for us. Stressing on unity, the pastor said we have One Father, One Lord, One Spirit. All Christians worship the same God. Nature of God, the Trinity- Father, Son and Holy Spirit are One.
Pastor Amala added that God hate division or separation, not pleasing to Him; for our God loves everyone and urged all to be united to build the Kingdom of God.

Fr Edwin was the last to speak. He reiterated that we want to build bridges, not divisions. We are Team Jesus. We pray what we have started here today in our vicinity- to work together in collaboration. As pastors able to come together, Fr Edwin suggested all can meet like for Christmas or Easter fellowship, as a start. Fr Edwin told the assembly that before when he was based in Bestari Jaya/ Kuala Selangor, the Christians there come together to share resources, with youths working together.

In ending a common blessing was given by the four preachers with Archbishop Emeritus Pakiam on a makeshift stage. This was done, after a prayer was prayed by them, led by Fr Edwin. He thanked all for coming to pray for Christian unity, as they believe in Christian unity.

The four preachers also received a token of appreciation, followed with a group photo with the members of PMEIA.

Also on Jan 19, 2017 at the St Andrew’s Presbyterian Church in Jalan Raja Chulan, a Christian Unity Week 2017 for the Kuala Lumpur City area, was held at 8pm. It was a joint prayer session with our Christian Churches in attendance; of which a large number of Catholics were also present- to pray for Christian Unity.
Cardinal Anthony Soter Fernandez, Archbishop Julian Leow, Archbishop Emeritus Murphy Pakiam, Msgr Leonard Lexson , Fr Gregory Chan and Fr Michael Raymond OFM Cap were the Catholic leaders present.