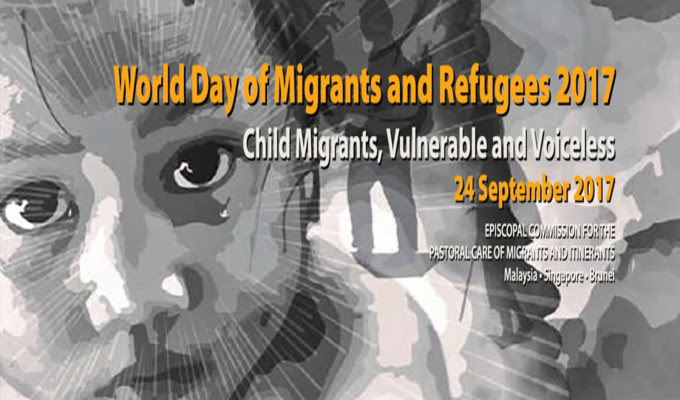 To Welcome, To Protect, To Promote And To Integrate The Migrants

KUALA LUMPUR:- The Malaysian Church celebrates the 101st World Day of Migrants and Refugees in the month of September.

This year’s theme is “The Vulnerable & Voiceless Child Migrants”.

At the Church of the Sacred Heart of Jesus, over the weekend Masses of September 23 & 24, parish priest Fr Edwin Peter in his homily expounded on the message for Migrant Sunday of Pope Francis to his parishioners.(Image)

Utilizing slides, the diocesan priest said people around the world travelled to other countries due to economic means; while some because of war or conflict in their countries of origins.

Migrants, the first wanderers, starting first by Moses going into Egypt. Fr Edwin also spoke about the Israelite, a people who are always wandering. Migrating from one place to the other. “We also know Baby Jesus with Mary and Joseph ran away from Holy Land to Egypt and come back when it is safe”.

Fr Edwin said from the television and other news media, we can see how many people have migrated to Malaysia, because of the situations of their countries. Never before today, we see many migration.

Vividly spoke about Pope Francis, on the many children who were migrants, because of war and conflicts in countries of origins. Human rights violation, physical & moral abuses,as well as sexually. Child are defenseless. Fr Edwin added that even being adult having numerous problem, what more for children. Pope Francis said the children are the most who are suffering.

Fr Edwin said if we imagine our children being migrant, helpless. He noticed the Migrant Sunday 2017 leaflets were all taken back and hope the faithful are reading the Pope Francis message.

“We need to welcome,open and be accessible human and open heart and offer them a proper shelter. Have attitude of welcoming to the migrants, especially the migrants child”.

Going further, Fr Edwin called on the assembly to also defend their rights and dignity. Every Christians to be protective of the migrants, love them , for they are defenseless and susceptible to be taken advantage of.

Fr Edwin said that promoting is not enough. We need to promote minor migrants who are most venerable and voiceless. Pope Francis practice what he preaches.

Integrate (Bring the migrants with particular characteristics or needs) into equal participation in or membership of a social group, institution or society). Fr Edwin said the Catholic Church is the family of God on the earth, welcoming everyone, integrating. We need to have the migrants integrate.

“Welcome, protect, promote and integrate, especially the child migrants. Pope Francis has said this is our calling; we need to be sensitive to others and reach out to them”.

In ending, Fr Edwin said the fragility and innocence of childhood is being exploited and oppressed on every level. We are called to respond it with compassion and trust them with dignity, remembering at all times. Be committed. He also shown a short video clip for his parishioners to be aware of the little migrants that we need to reach out.

Fr Edwin said under the parish mission concerns,PIHDM, they have sub-ministries like the Migrant Ministry, Society of St Vincent De Paul (SSVP), Women Desk and Prison Ministry. “”It is not sufficient by praying and praying; but we need to reach out and touch others in works of mercy”.

The parish priest invited all parishioners to get in touch with the PIHDM, join and to reach out. We have now Sunday School that caters for the migrant children. He also thanked all those donating every First Sunday on the Second Collection. He said about RM6,000/- every month were dispersed to SSVP for the poor and migrants’ needs.