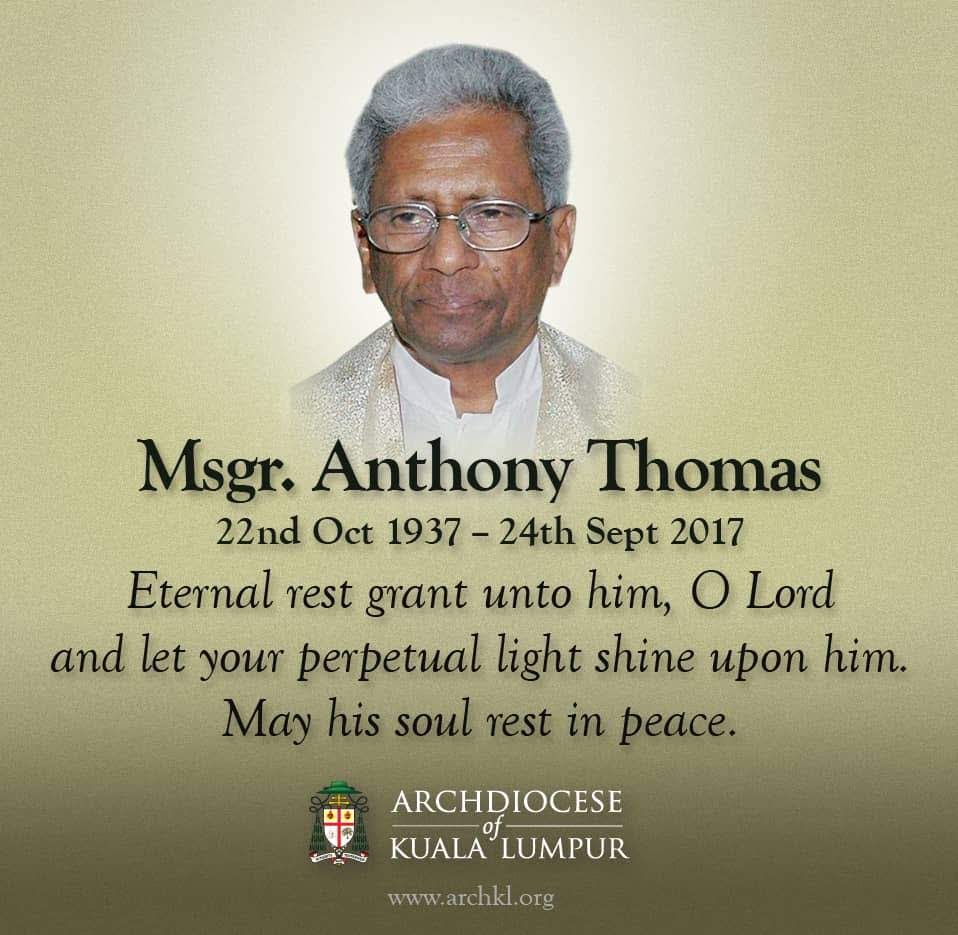 KUALA LUMPUR:-Diocesan priest, Monsignor Anthony Thomas, aged 80, who was called to be with the Lord on September 24, 2017, has dedicated his whole life spanning some 52 years as a faithful, dedicated and humble priest in the Archdiocese of Kuala Lumpur.

Since being ordained as a diocesan priest in February 1965, Msgr Thomas who hailed from Kuantan has served in several parishes, building up not just the Catholic communities spiritually, drawing many back to the Church by bringing God’s goodness into their lives, transforming many people; but also instrumented in building new Community Centres in Sentul, Seremban and Jalan Peel Kuala Lumpur. Among the large parishes that Msgr Thomas had served were St Joseph Sentul, Visitation Seremban and Sacred Heart Kuala Lumpur.

His last posting was at the historic Church of St Aloysius in Mantin, as parish priest for some 5 years, until early 2013. During his tenure there, he personally visited all Catholic homes including those lapsed Catholics and encouraged them to attend Mass. However due to infirmity, he retired and was place in the care of the Little Sisters of the Poor in St Francis Xavier Home for the Elderly in Cheras, until his passing.

Msgr Thomas was a gifted and talented man of God. His love for music, made him a great musician who could play piano, organ, guitar and violin. This attributed him to contributed immensely to building -up the local Church in the repertoire of hymns, responsorial psalms musical settings and Mass ordinaries, widely used in the local Church and elsewhere. While as parish priest (1998 -2008) at the Church of the Sacred Heart of Jesus, Msgr Thomas launched his completed Responsorial Psalter (Years A, B & C), in three languages. He has also served as the Ecclesiastical Assistant in the Archdiocesan Liturgical Commission for many years, among others.

In 2010, Pope Benedict XIV bestowed the title of Monsignor on Msgr Thomas for being a dedicated, humble, loving and caring priest of 45 years, who had contributed tremendously to the local Church in Malaysia. (The other recipient was Msgr Daniel Lim).

Msgr Thomas celebrated his Sacerdotal Golden Jubilee in March 2015, where a Thanksgiving Mass presided by Archbishop Julian Leow in the Chapel of the St Francis Xavier Home for the Elderly in Cheras, where Archbishop Emeritus Anthony Soter Fernandez and Archbishop Emeritus Murphy Pakiam with several clergy were present, with residents and family members and friends.

Droves of faithful from far and near, especially those whom knew Msgr Thomas came to the Church of the Sacred Heart of Jesus in Jalan Peel, on Sept 25 and 26 where his body was laid in state for the prayers at the wake and for the Vigil Mass at 8pm.

In his homily, Fr Lawrence narrated about Msgr Thomas past accomplishments as a priest in his ministry. “In all the places, Msgr Thomas ministered, he able to give new life, new strength to so many”. Fr Lawrence asked how did he do it? He said because Msgr Thomas is constant and steadfast with God ; when he reconciled with God, he has the hidden energy in him. Msgr Thomas live to give the gift of life to humanity for the greater glory of God.

Fr Lawrence also spoke about Msgr Thomas talents in music, his ability to sing and produced the music for the Responsorial Psalms, resonate with God, that were used in the various Churches throughout Malaysia. A truly pioneer music nature.

On liturgical itself,the joy of so intimately connected with God. Because Msgr Thomas himself molded in Christ, he is able to build Community Centres for Sunday School classrooms for our children to deepen their faith.

Fr Lawrence added that Msgr Thomas was truly is the product of the Vatican Council II, a product who from Sentul to Seremban and here in Jalan Peel to Mantin, he build communities in his mission.

This priesthood must be shown to the world. The Gospel text today (Luke 8:16-18), said no one lights a candle to cover it with a bowl or put it under a bed. He puts it on a lamp-stand so that people may see the light. “Put it out to radiance the light to show that Jesus lives in us”, added Fr Lawrence.

“Today we thank God for this great man (Msgr Thomas), united with God now for all the good he did for the Church and society. He will be missed. He shown us God’s love, because he believed. God is reconciling him, and all who believe in Jesus Christ”.

Many keep on coming as wake prayers were held until 12 midnight on September 26. On September 27, the Requiem Mass was held at 11am, with Archbishop Julian Leow presiding with many clergy and faithful present. 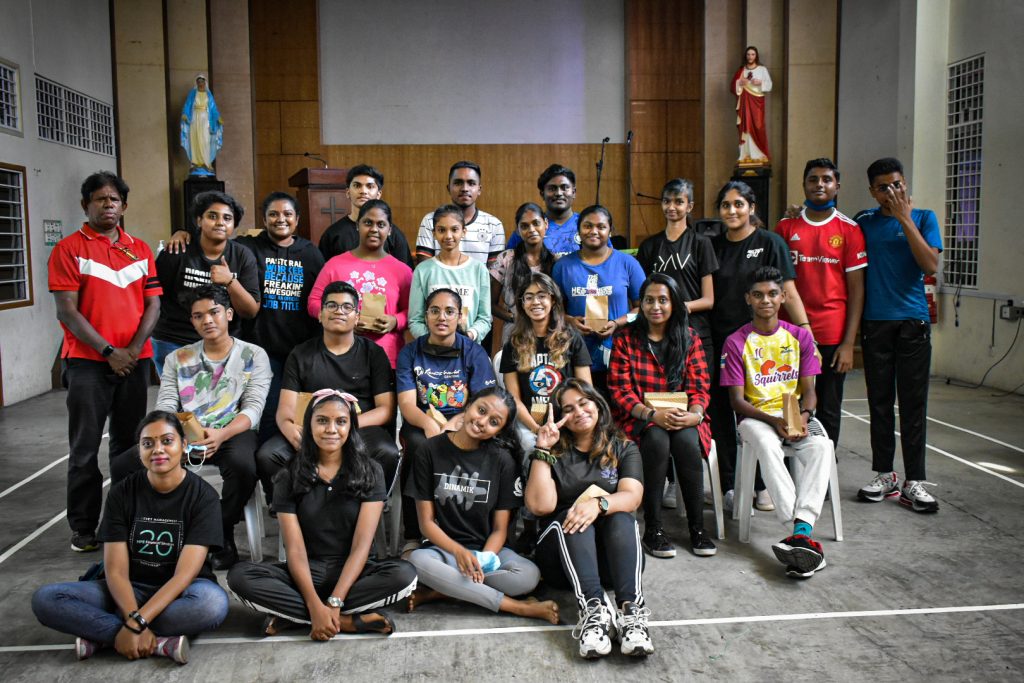